Sclerotes in chickpea and lentil

Posted in Agronomy alert, Marketing and trade on Dec 22, 2016

Due to higher than normal fungal disease pressure in many regions during the 2016 winter growing season, sclerotes (fungal disease survival structures) have been found in some chickpea and lentil grain deliveries.

Sclerotes from Sclerotinia disease are not harmful to humans or livestock however those from ryegrass ergot (Claviceps purpurea) disease are toxic. The problem for growers and receival staff is that the sclerotes from these two diseases cannot be positively distinguished without the use of laboratory techniques.

This season has been one of the wettest for many years throughout much of the winter cropping regions of Australia. After a relatively dry start where many crops were dry sown, the season turned in June to be a record wet, with many paddocks waterlogged for long periods. The upside has been record yields for crops in well drained paddocks, but the incidence of a wide range of fungal diseases coincided with shortages of fungicide to make it a difficult year for managing diseases in many pulse crops.

Many pulse crops suffered high levels of fungal disease, including Ascochyta, Botrytis and Sclerotinia. These are all fungal infections that affect the upper parts of the plant, particularly in dense crops like we have seen this season, and are carried over in stubble from crop to crop.

Sclerotinia has a wide host range, and in chickpeas can occur in two different forms. These are distinguished mainly by the size of the sclerotes. Sclerotes are the survival structure of the disease, and can be viable in soil for up to 10 years.

Sclerotinia sclerotiorum is characterised by large, irregular structures 5–10 mm in diameter and 20–30 mm long (see Image 1), whereas Sclerotinia minor has much smaller, angular sclerotes, rarely larger than 2–3 mm in diameter. Although Sclerotinia sclerotes are a grain contaminant that can affect quality by producing darker coloured flour, they are not considered dangerous to humans or livestock. 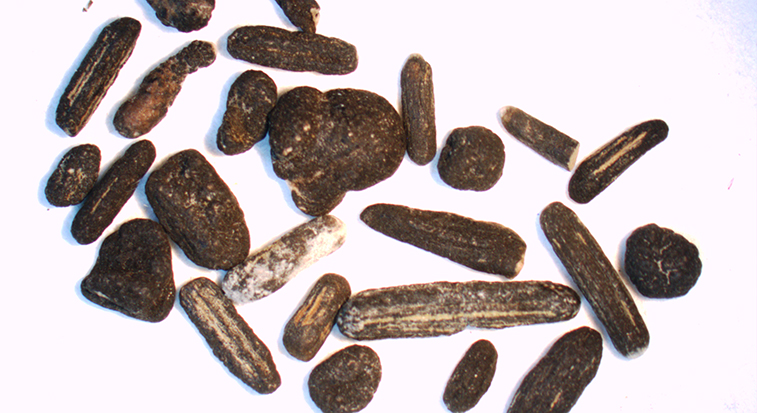 Ryegrass ergot (Claviceps purpurea) is another less common, but dangerous disease, that also produces sclerotes. Claviceps and Sclerotinia sclerotes are visually indistinguishable. Claviceps sclerotes (Image 2 & 3) are unsafe for animals and humans due to the production of toxic alkaloids, which remain a problem even after processing. 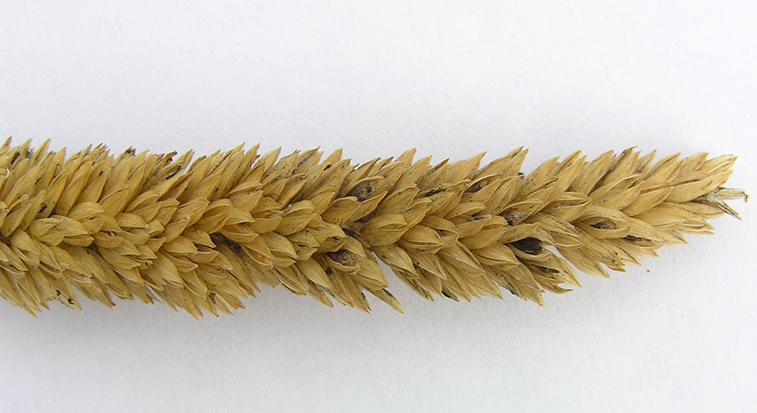 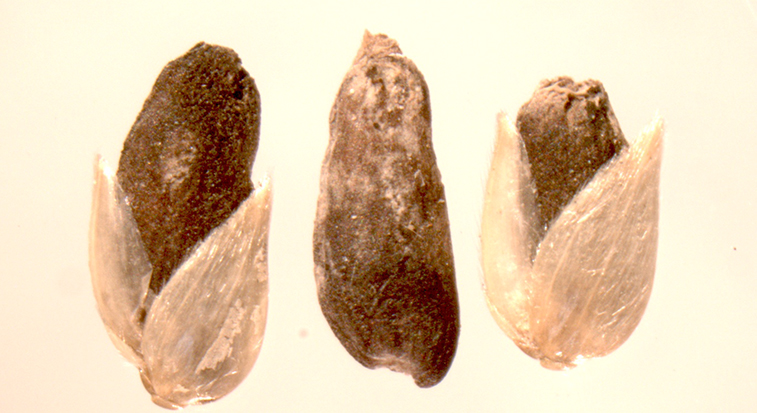 In some northern chickpea growing areas this year, sclerotes in loads delivered to grain receival sites were initially believed to be from ryegrass ergot. Identification was made more difficult this season by the atypical size and shape of Sclerotinia sclerotes (Image 4), raising concern that the sclerotes present may have been from ryegrass ergot. Plant pathologists have now positively identified samples of sclerotes from affected chickpea loads to be Sclerotinia, using microscopic analysis of cell structures and other analytics. 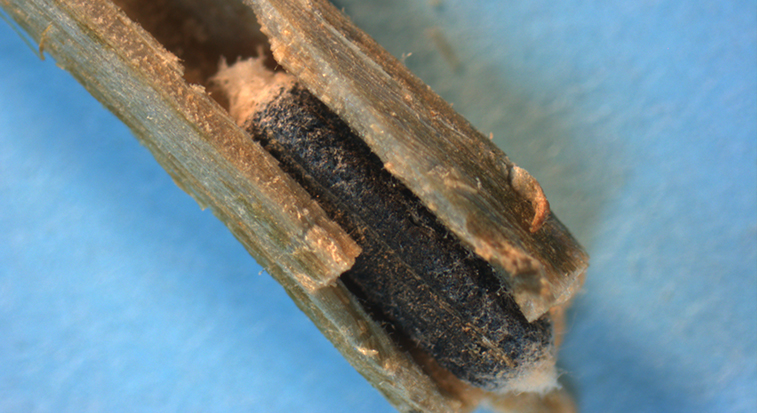 Information from southern Australia is that sclerotinia was common in lentil crops in 2016 and there have been issues with sclerotes in red lentils at delivery. This is a particular problem for the smaller seeded lentil varieties where sclerotes may not be able to be graded out. In amongst this there have been isolated incidences of loads being rejected based on ryegrass ergot but the growers have queried if it were sclerotinia. In some situations ryegrass could not be crop topped effectively in lentils this year due to the wet season so there is a potential for ergot, although we might expect that ryegrass ergot would go out the back of the harvester, due to the smaller size of the sclerotes, compared to pulse seeds.

The major market for the Australian chickpea and lentil crop is India where a nil tolerance for ergot in other commodities that we export, is enforced. If ergot is found in these crops it could cause a market restriction or closure, seriously and adversely affecting grower pricing.

Ryegrass is not a major weed of chickpea crops grown in Queensland and northern NSW, so it is highly unlikely that ryegrass ergot would be present in grain grown in this area. Ryegrass is a major crop weed in Victoria, South Australia and southern NSW, so there is a higher probability of ergot being present in the crop, however harvesting techniques should minimise the risk of contamination. As seasonal conditions have been favourable for Sclerotinia, it is much more likely that any sclerotes present are from Sclerotinia, rather than ergot.

The Pulse Australia standards (Table 1) list ergot, but do not specifically mention Sclerotinia, which falls under other categories of foreign matter, unmillable material or objectionable matter in the absence of a definition. Some deliveries from farms were rejected due to the application of the ryegrass ergot standard. Changes could be made to the standards to show sclerotinia as a defined contaminant.

In future, the recommendation is for receival staff to be trained in sclerote identification using samples of bona fide ergot sclerotia and typical and atypical Sclerotinia sclerotia, along with photos of material from this year’s cases. Receival companies should also be provided with a risk assessment checklist to assist in understanding the probability of ergot occurring in different crops and contact details for external assistance. Development of a rapid test such as ELISA or a DNA marker would give a definitive, quick answer.

For farmers who have had chickpea loads rejected at receival sites, grading (either on or off farm) will remove the sclerotes. If pulse crops are identified with Sclerotinia in future years, harvesters can be set up to increase air flow to blow these smaller atypical particles out the back of the header, minimising the risk of capturing sclerotes.