PKS in peanut and puffy pod in mungbean appears to be connected in some way to phytoplasma infection. Plant virologist, Dr Murray Sharman is trying to scientifically confirm or deny this apparent link.

Growers and agronomists can assist by submitting plant samples. To-date, every peanut plant submitted for testing that had phytoplasma symptoms has tested positive to phytoplasma and had some or all kernels showing signs of PKS.

Similarly in mungbeans, 100% of plants showing symptoms of puffy pod have tested positive to phytoplasma.

As crops reach maturity, you can scout for plants showing signs of phytoplasma and submit samples for testing. Estimate how many plants in the crop are affected (in 2018 incidence of infection was around 1% of plants).

Contact Murray for instructions before collecting or sending samples: 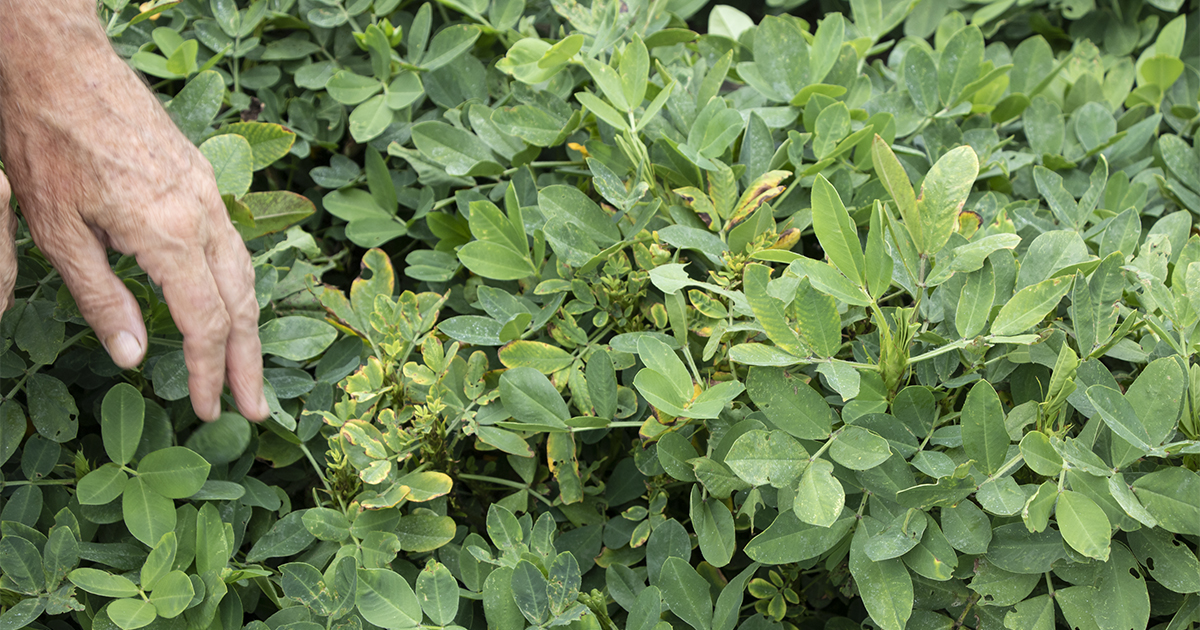 Spotting symptoms in the field amongst healthy plants. 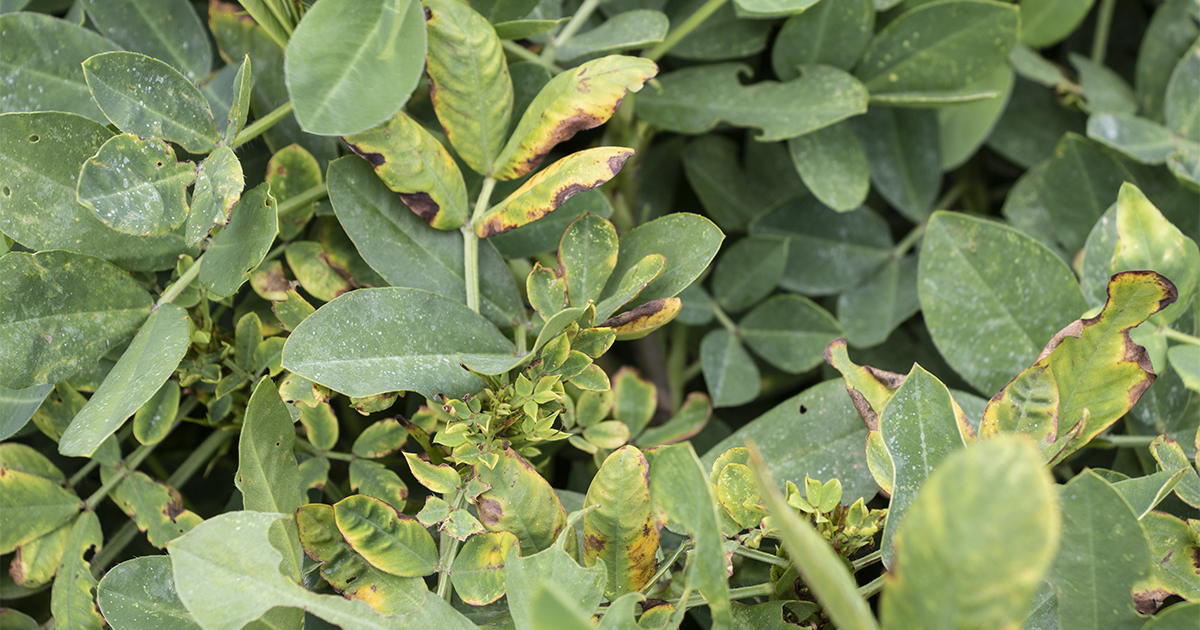 Look for dense clusters of small and mis-shapen leaves. 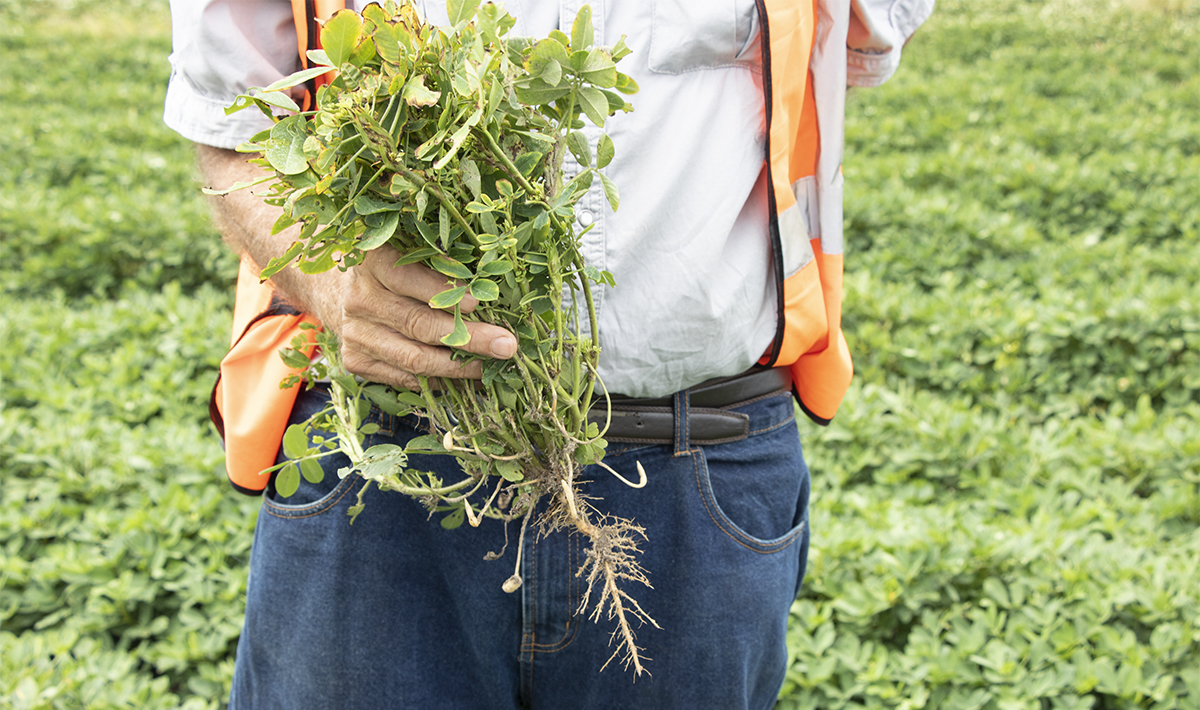 Infected plants often have fewer pods and poorly developed root systems, possibly depending on the crop stage when infection occurred.

So, who's spreading phytoplasma?

It seems likely that a leafhopper is the insect vector of phytoplasma. The main suspect is the common brown leafhopper (Orosius orientalis but tests are yet to confirm this.

Look for symptoms in surrounding weeds or in volunteer crop plants in fallow paddocks, as this may indicate a higher risk of transmission into newly planted crops. Keeping fallow paddocks clean and controlling nearby weeds is the only management strategy advised until a culprit can be clearly identified.

Monitor for all leafhoppers using a sweep net.

What does PKS cost the industry?

PKS does not affect peanut edibility or end-use traits, but it has a significant impact on yield, kernel grades and returns. PKS appears to affect normal assimilate transport through funiculus/testa, resulting in reduced kernel size. Despite reduced size, kernels have normal taste/flavour, germination and blanchability (skin removal). However, with a lower percentage of larger Jumbo kernels and a higher percentage of kernels going to oil production, there is a significant financial penalty.

To date, PKS has been a bigger problem in coastal production areas around Bundaberg, although it has been observed to a lesser extent in the inland Burnett, Southern Queensland and North Queensland. Some years have a higher incidence than others. From 2010 to 2014 there was a downward trend in Jumbo % and an increase in shelling % of peanuts recieved from the Bundaberg area, with some recovery since 2014.

Over the past nine years, PKS has cost the industry more than $5 million with reduced returns to growers in the order of $500–1450/ha. There has also been an indirect cost with loss of confidence in growing peanuts in rotation with sugarcane in coastal production areas, which was set to expand significantly from 2010 onwards.

An elegant solution to PKS

Plant breeding appears to be a possible solution to PKS. Plant breeders, led by PCA's Dr Graeme Wright, has observed a very large genotypic variation in PKS susceptibility/tolerance in their Variety Trials.

Preliminary data suggests that the genetic control over PKS tolerance may be quite strong, opening up a real possibility for breeding PKS tolerance into future varieties developed for the industry.

For the purposes of this study, PKS-kernels are considered to have some or all of the following symptoms:

Whole plants displaying phytoplasma-like symptoms on leaves (ranging from small, yellow leaves in the canopy to severe little leaf and proliferation of branching) were collected from multiple crops in the Bundaberg, Childers and Kingaroy regions in 2018. From the same crops, non-symptomatic plants (assumed to be healthy) were also collected. Pods were opened and kernel symptoms were assessed (and photographed) for PKS-like symptoms as described above and shown in images in Fig 1. 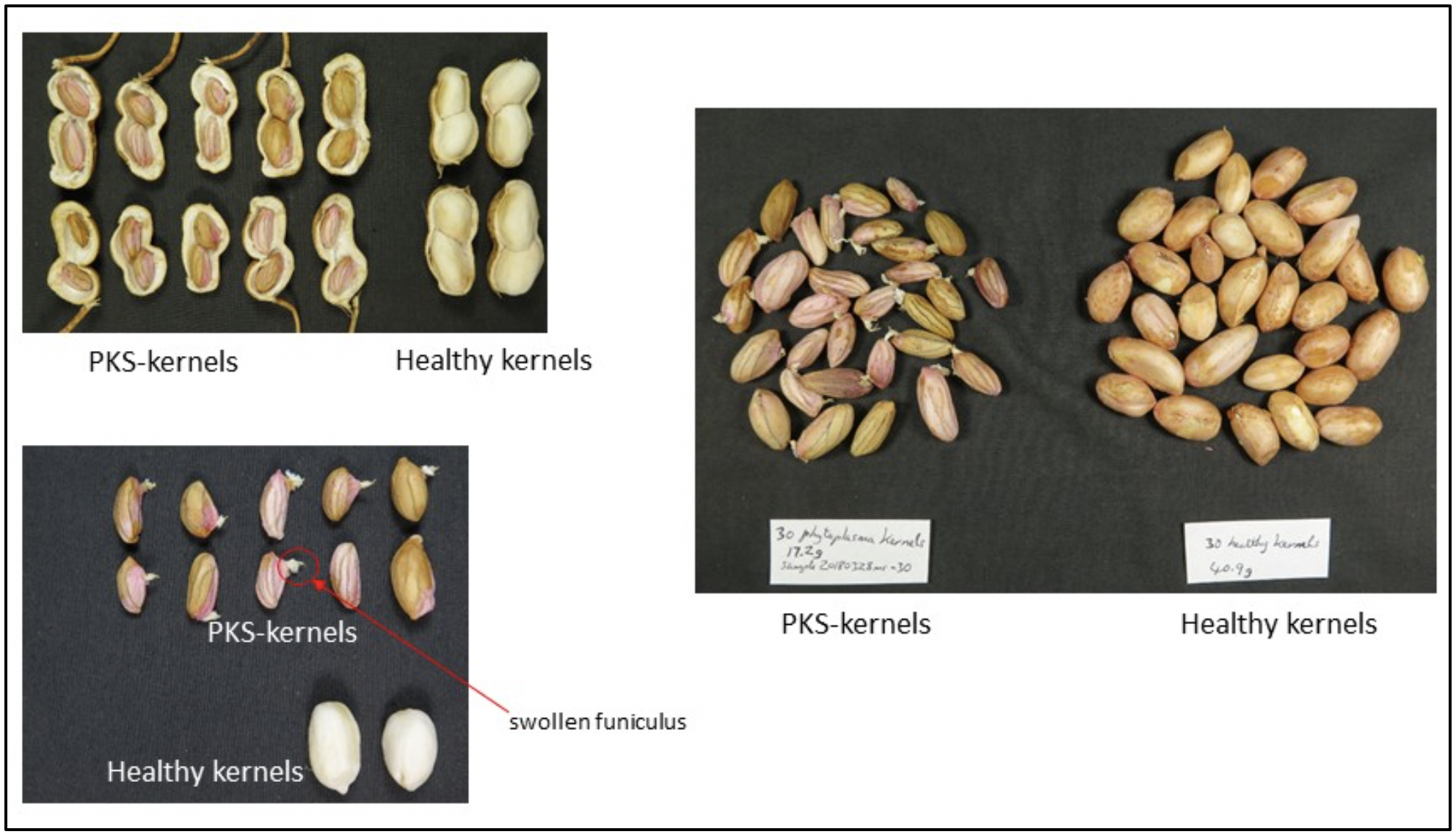 Fig 1. Images of kernel symptoms used to define peanut kernel shrivel (PKS) for the purposes of this study.

The incidence of phytoplasma symptomatic plants in the crops inspected in 2018 was typically less than 1 %. However, a total of 57 peanut plants with phytoplasma-like symptoms on the leaves were collected and all tested positive for phytoplasma by nested PCR.

There were quite variable numbers of kernels per plant ranging from 1 to 56 which reduces the usefulness of considering the % incidence of affected kernels per plant (e.g. 1/1 is 100% which is not as important for yield impacts as 55/56 kernels). For this reason I have used an adjusted score to provide some weighting to those plants that had a higher number kernels per plant and a high incidence of PKS on those kernels. From 57 plants, the average number of kernels per plant was 19.8. The following formula was used to determine a weighted PKS score for each plant:

A total of 30 'healthy' plants (not displaying foliage symptoms of phytoplasma) were randomly collected from several crops that also had phytoplasma-infected plants. All 30 plants were negative for phytoplasma by PCR. All kernels were assessed for PKS-like symptoms and a low number of kernels (5-25%) with PKS-like symptoms were seen on 8/30 plants. Generally the observed symptoms did not fit the typical PKS symptoms illustrated above in Fig 1 but appeared shrivelled (Fig 4) and were rated as possible PKS.

It is possible these kernels represent a normal low level of deformed kernels. From a total of 675 kernels, there were 12 (1.8 %) that had these possible PKS kernels. The PKS score, as described above, was applied to the 30 non-phytoplasma plants using an average of 22.5 kernels (from the non-phytoplasma infected plants) and is shown in Fig 3 using the same maximum scale as used for the phytoplasma-infected plants. 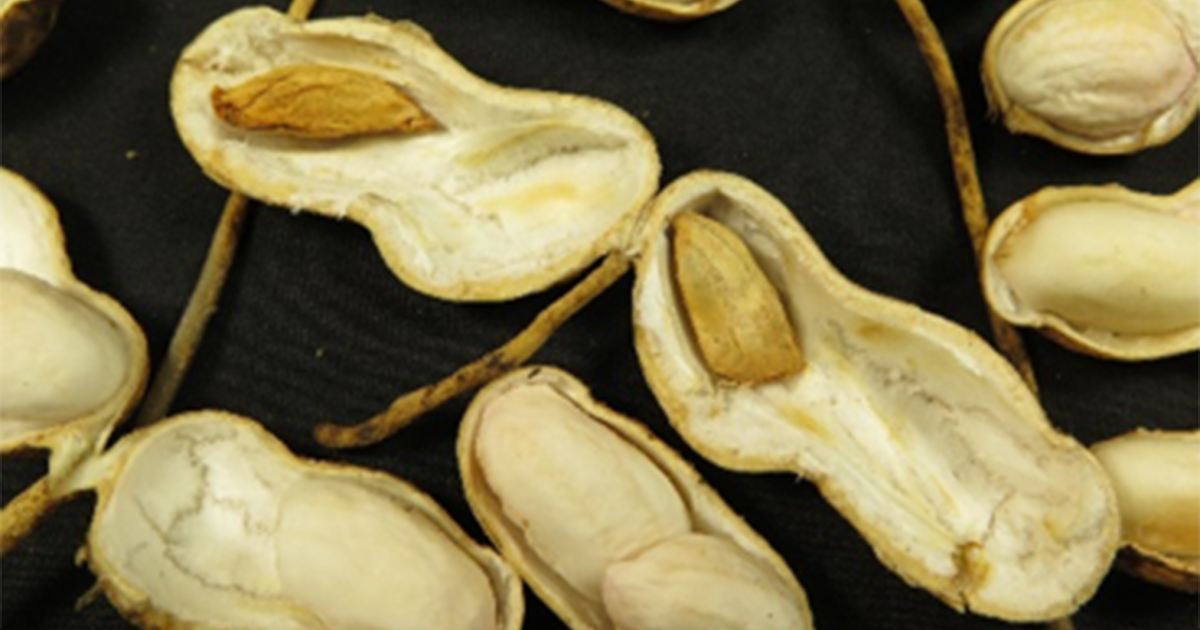 Fig 4. Sample 20180328ms-7 which had healthy growth and negative for phytoplasma by PCR but had non-typical shrivelling of 2 out of 28 kernels. These were rated as possible PKS kernels but generally did not display typical PKS symptoms described above.

This data set and the comparison of the two graphs clearly demonstrates that plants infected with phytoplasma in 2018 were much more likely to have kernels with PKS symptoms. No healthy (not infected with phytoplasma) plants were found with high numbers of PKS kernels. Surveillance will continue to investigate if plants with high numbers of PKS kernels can be found in the absence of phytoplasma in case there is another unknown causal agent or physiological cause.

Attempts are also being made to graft transmit phytoplasma from infected peanuts to healthy potted plants to try to induce PKS symptoms in kernels. Several plants have been grafted and at least a further 12 will be done in the next few weeks now that infected field material is becoming available. These test plants will be monitored for symptoms and tested by PCR for phytoplasma.

We continue to engage with industry to try to identify crops affected by suspected puffy pod in order to investigate possible alternate causes in addition to phytoplasma infection. Often the plants with puffy pod appear to be late infections of phytoplasma with only the top terminal growth displaying phyllody symptoms. Early infections that develop severe little leaf and stunting generally do not flower or set fruit, in a similar manner as seen with peanuts and chickpea.