Back to back chickpea is high risk

Pulse pathologist, Dr Kevin Moore urges growers to resist the temptation to plant chickpea in 2016 into paddocks with a recent history of chickpea.

Back to back chickpea is high risk

Most growers are aware of the recommendation to not plant chickpea into paddocks with a recent history of pulse crops. The current high chickpea prices however are very attractive and some growers may be wondering if the risk is worth the potential financial gain.

The reality is that the risk is far too high—not just for the individual crop and grower but for the whole industry.

Planting chickpea on chickpea will favour Ascochyta blight, Phytophthora root rot, Sclerotinia rot and root lesion nematodes and, if conditions are conducive, the first three have the potential to cause 100% crop loss.

Even if there was no sign of these diseases in the 2015 crop it is not safe to plant chickpea on chickpea in 2016. There are two significant cases from recent years where severe outbreaks of disease occurred in paddocks where it appeared safe to plant.

The first case was in a paddock planted mainly to PBA HatTrick in 2013, with a strip of the new variety PBA Boundary. Although the soil was a grey clay vertosol, no Phytophthora root rot (PRR) was observed in either variety in 2013. In 2014 the whole paddock was sown to wheat and then to PBA HatTrick chickpea in 2015. In September 2015 a lab test confirmed that Phytophthora was the cause of plant deaths in the strip that had previously been sown to PBA Boundary, a variety that is susceptible to PRR. The affected crop area was so severely disease-affected that it was not harvested in 2015 while the remainder of the paddock yielded over 2 t/ha.

In the second case, several paddocks on one farm were planted to Kyabra in 2014, and because Ascochyta blight was not detected on the farm or in the district and El Nino conditions were expected, some of these paddocks were sown to Kyabra again in 2015. Since Kyabra is susceptible to Ascochyta blight the plan was to manage the disease with fungicide should it become a problem in 2015. Even though the disease was not detected in 2014 it was clearly present on the farm and plants were infected in late autumn or early winter 2015 and wet weather prevented the application of fungicides until mid-July. By this time the disease was well established in all chickpea crops on the farm and was particularly severe in paddocks sown to chickpea in 2014. Although no more rain fell after the end of July the badly affected areas yields just 0.6–0.8 t/ha compared with Kyabra planted into wheat stubble that went 1.0–1.5 t/ha. 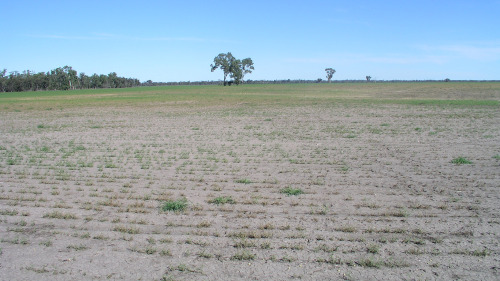 Rampant Ascochyta in a crop of Kyabra, sown into a paddock with a recent history of chickpea production.

So, we know the risk is real for a back to back chickpea crop, with financial losses expected due to lost yield or quality and higher production costs. There are also longer term consequences, particularly for diseases like Sclerotinia that have a wide host range. The survival structures, sclerotia, remain viable in the soil for many years and could potentially affect many crops including faba bean, canola, lupin, field pea and cotton.

The ‘best’ place to look for chlorothalonil resistance isolates of Ascochyta would be in early sown back to back Kyabra. It would be unlikely for any such isolate to be confined to the paddock or farm as the resistant isolate could spread from a single farm to the whole cropping area of the Darling Downs, northern and north central NSW within a few seasons.

The resounding advice then is that planting chickpea on chickpea is far too risky and the risks to the grower and the industry far outweigh any potential gain. Seed treatments and fallow cultivation do not reduce the risks associated with back to back planting. The current best practice recommendations for disease management in chickpea are to:

DO NOT even consider planting back into last year’s or even the previous year’s chickpea country. It’s not worth the risk and it is doesn’t make sense. As well as increased risk of disease in back to back chickpea, the management of weeds and insects will also be more challenging. At $800/t likely for chickpea in 2016 it will pay to do everything possible to reduce risk and maximise yield and quality.