Most new varieties are protected by PBR and/or end point royalties and so growers need to be aware of the implications.

Seed of varieties with PBR protection can only be bought from the owner, commercial partner/licensee or an agent (seed merchant) authorised by the owner. Purchase seed of a PBR cultivar in the name(s) of the entity or entities in which you intend to deliver the product. Retain invoices to prove that you have entitlement to that seed and the crop produced.

Once purchased, growers can maintain seed of a variety with PBR protection to satisfy their seed requirements for the following seasons. Farmers can sell the products of a protected variety for commercial use as feed or food unless bound by a 'closed loop' or other contract. Farmers cannot sell, trade or give away the variety for seed. Farmer to farmer trading of seed without authorisation of the owner will make them liable for prosecution.

Plant breeders rights (PBR) was introduced to stimulate private investment in plant breeding by conferring ownership rights to varieties and thereby the potential to market those rights as part of a commercialisation process.

The Plant Breeder’s Rights Act 1994 as amended Act no: 148 2002 gives an owner of PBR the exclusive right to sell, produce or reproduce, import, export, stock or condition the seed of a variety protected by PBR (or license another person or organisation to undertake these activities).

The rights are similar to patents or copyright, (recording ownership of the genetic material) and are administered under the Act.  PBR protection can last up to 20 years for broadacre crops.

PBR guarantees ownership of a variety but does not specify how the variety should be commercialised, or whether or where royalties should be charged. Varieties protected by PBR usually have the PBR symbol displayed after their name.

In the absence of a contract stating otherwise, farmers can sell the harvest of a protected variety for direct consumption as food or feed (e.g. deliver it for animal feed or to a flour mill) but they are not permitted to sell, trade or give away the variety for seed without the authorisation of the owners or licensee.

The concept generally referred to as ‘end point royalty’ collection gives the licensee the right to collect royalties on harvested grain.  Some varieties currently grown by farmers use this method of royalty collection (e.g. ‘Kaspa’ field peas and ‘Jindalee’ lupins).

An end point royalty can apply to a variety without PBR.

Farmers should carefully read all documentation to be fully aware of the conditions when purchasing seed of a variety. While the restrictions in the use of seed under the PBR Act are clearly defined, other contractual arrangements may have been imposed by the licensee following agreement by the owners. For example, some contracts specify that the harvested grain must be delivered to certain collection agencies; these are commonly called ‘closed loop’ marketing arrangements.

Royalties on seed used to be imposed on some pulse varieties at the point of purchase, but it is more common now for companies to utilise EPR arrangements to lessen the initial seed price. EPRs last for a considerable time on a variety and may still be in place even when new sowing seed of that variety is no longer commercially available through the commercialising company. 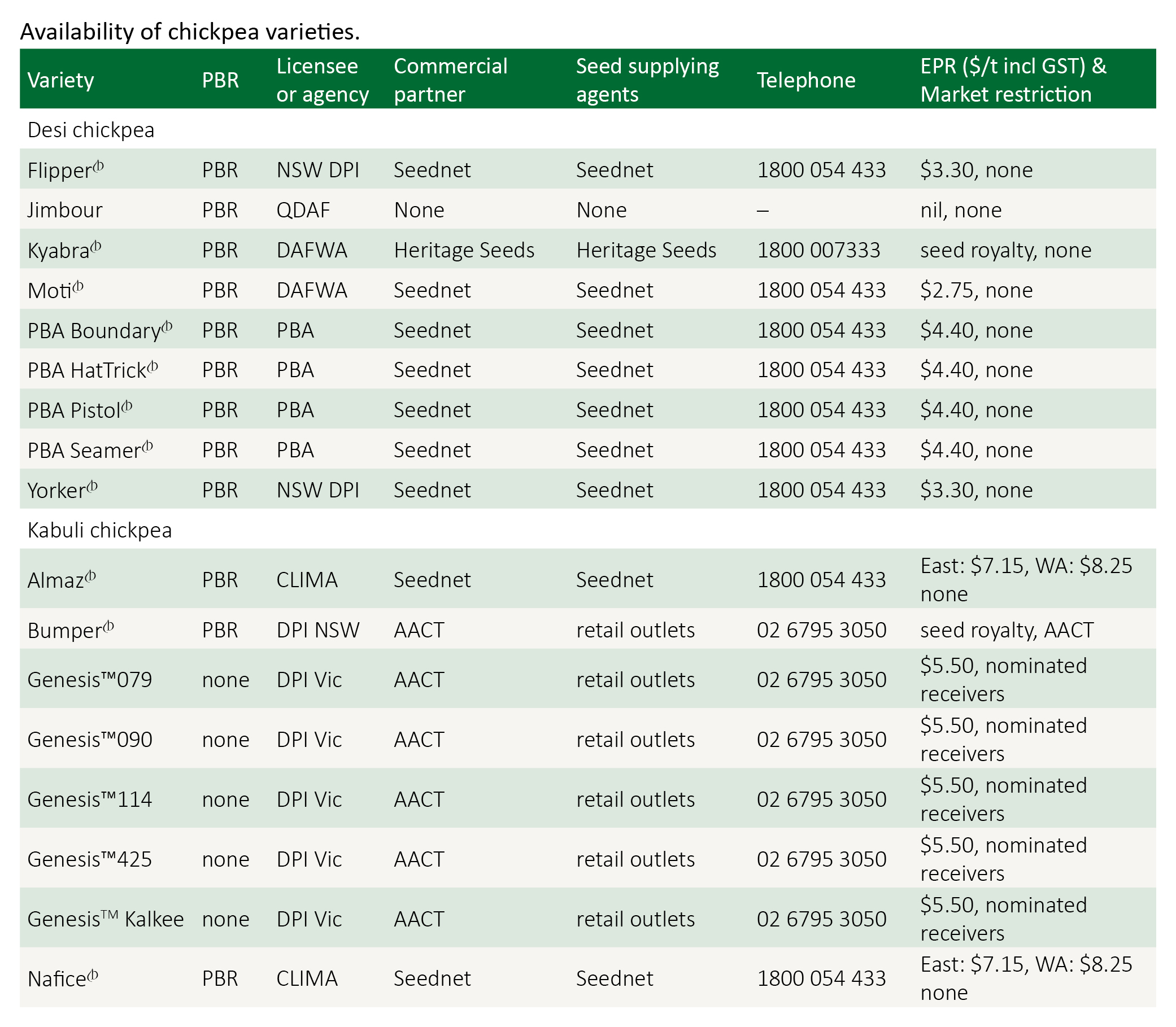 The major commercial partners associated with pulse varieties are: