Native budworm (Helicoverpa punctigera) is a major pest of pulse crops across southern Australia. Direct losses are usually associated with yield through grain being wholly or partially consumed by the caterpillar. However indirect losses from quality issues can result in downgrading or even rejection from high levels of damaged grain, weathering or fungal infections from holes in pods, discolouration or odour.

It is important to be able to identify this pest, and to be able to accurately monitor for moths and grubs in the crop. A good knowledge of threshold numbers required for each crop and initiating timely control measures can often avoid costly crop losses.

Native budworm breeds during winter in the semi-arid regions of Australia and moths can often migrate long distances in early spring into the southern agricultural districts. Adults are nocturnal and often seen around lights at night which can be an indicator of their arrival other than deploying pheromone traps to capture male moths.

Moths can be seen in crops by their rapid, low-level flight that takes a zigzag path then diving into a crop to lay eggs. Moths can lay up to 1000 white spherical eggs (0.5mm) that are laid singularly and are mostly found near the top of the plant. Eggs darken as they mature and larvae hatch in 7-14 days.

Lifecycles of Helicoverpa spp takes 4-6 weeks from egg to adult in summer and 8-12 weeks in spring or autumn. The lifecycle stages are egg, larvae, pupa and adult (moth).

Budworm eggs can be found singly on the growing tips and buds of plants. They are small (about 0.5 mm in diameter) but quite visible to the naked eye after close inspection of the plant. They are white when first laid but change colour from yellow through to brown as they get closer to hatching.

Newly hatched caterpillars (larvae) are very small at approx 1.5 mm, light in colour with dark brown heads and can easily be missed when inspecting a crop. They will pass through six or seven growth stages or instars until they are up to 40 mm long.

When fully grown, they can have considerable colour variation from green, buff yellow, red or brown to almost black, with a broad yellow-white stripe down each side of the body and a dark stripe down the centre of the back.

There are two species of Helicoverpa that look similar and it is important to identify them and an understanding of the likely presence and population mix of these two Helicoverpa species, particularly when making control choices as Helicoverpa armigera has developed resistance to the commonly used pyrethroid chemical group (e.g. Decis Options, Karate), and to carbamate group (e.g. Lannate L). Separate pheromone traps can be deployed to trap both species and is an indicator of their presence and the likely mix other than identifying the moths or larvae that are present.

Helicoverpa armigera (commonly known as corn earworm or cotton bollworm) is not as common in the south and is more problematic in summer crop irrigation areas. They can overwinter from March onwards and emerge during Sept/Oct with main activity in summer and autumn.

Adult moths have a wingspan of approximately 30mm and are stout bodied, around 20 mm long and similar in appearance. The fore wings are buff olive to red brown with darker spots near the edge. H. punctigera are pale with a uniform dark band along the edge of the hind wing while H. armigera have a small light or pale patch in the dark band.

Observing the activity of moths in the crop and presence of eggs may be indicative of future larval activity but not always as there can often be high levels of mortality of eggs and larvae particularly if conditions turn cold or they are dislodged from the plant by wind or rain, or fall prey to natural enemies such as;

A key component to any IPM is to maximise the number of beneficial organisms and incorporate management strategies other than pesticides. Correct identification and monitoring is the key when checking for build up or decline in beneficials. Photos of beneficials can now be found in the GRDC Insect Ute Guide.

All crops should be scouted weekly during flowering for moth activity and eggs, then at least two times per week during podfill for eggs and larvae. The main egg laying period is often around the flowering period when moths can be quite abundant. Eggs can often be found on the vegetative or floral growing points, new leaves, stems, flowers, flower buds and young pods. They may not be obvious to the untrained eye unless there is a heavy egg lay or until small larvae can be found.

Crop types can vary in attractiveness to moths for egg laying and as a general rule lentils are the most attractive followed by field pea, vetch, faba bean, chickpea, and lupin. Crop health, density and growth stages (flowering and podding) will generally affect the number of eggs laid with moths mostly preferring the more advanced dense and succulent areas.

Feeding behaviour of caterpillars also changes according to the pulse type with field pea, chickpea, lentil and faba bean crops being more susceptible to all sizes of caterpillars during pod formation and development. While tiny caterpillars will usually foliage feed, there are times such as in hot dry conditions that they will burrow into emerging pods as they become more palatable than the wilting foliage.

In the case of narrow-leaf lupin crops they will not be damaged until they are close to maturity and the pods are losing their green colouration. Pod walls are not penetrated until the caterpillars are over 15 mm in length. Small caterpillars (<10cm) may enter flowers but usually prefer to feed on leaves unless heavy numbers develop early during flowering and budding.

The decision to spray a lupin crop should not be made until damage is about to happen as beneficial insects will often reduce caterpillar numbers over time. Albus lupins often attract more moths leading to higher egg lays and combined with higher standards required for Middle Eastern markets will often warrant regular control.

Pheromone traps can provide an indication of the species presence in a region but are not a reliable predictor of actual egg lay or grub numbers within a crop.

The quickest and easiest method to sample most crops is with a standard sweep net (380mm diameter) and taking 2 metre long sweeping arcs in multiples of 10 sweeps in several parts of the crop keeping the lower edge of the sweep net slightly forward to catch any dislodged grubs.

This roughly equates to a sampled area of one square metre. This method works well in short and thin crops such as field peas, lentils and vetch but may be less efficient in tall dense crops of faba beans, lupins and chickpeas.

Trials conducted in WA have found that semi-leafless field peas (eg: Kaspa) with intertwined tendrils makes the netting efficiency only half that of the conventional trailing types (e.g. Parafield, Sturt) and 10 sweeps is usually sufficient to provide only estimates that equate to numbers present over 0.5 square metre.

Gently cutting plants from an area such as 0.25 sq metres (0.5 m x 0.5 m) and shaking larvae into a large basin or a white sheet or poly bag is very simple and more accurate with less plant and flower material than the sweep net but more time consuming as at least 5 separate sites are sampled within a crop and the numbers averaged.

It is the preferred method for sampling narrow-leaf lupin crops that are difficult to net close to maturity (i.e. rigid and spiky) and trials conducted in WA resulted in more accurate larvae counts.

A beat sheet used in summer row crops is now finding more use in wide row chickpeas and faba beans. A standard beat sheet (plastic or canvass) measures 1.3 metres wide with heavy dowel to weigh it down and is 1.5 metres long. Place one edge at the base of a row and if on one metre spacing can be spread out across the inter row space (Figure 8). If rows are narrower then it can be draped over the adjacent row or there is canopy closure. Using a 1 metre long rod (heavy dowel or conduit), vigorously shake the row 10 times over the sheet to dislodge and catch larvae.

Misleading conclusions can result from inadequate sampling as grub numbers can vary greatly within a crop and sampling needs to be conducted at five or more randomly spaced locations and then averaged.

Keeping good records should be a routine part of crop monitoring and will show if pest numbers are increasing or not and if the economic threshold has been reached.

Records should include items such as:

The spraying program should aim at controlling small larvae (< 1cm) that are normally foliage feeding and easier to control and often requiring lower insecticide rates. If using a ground or aerial contractor then book them well in advance and keep them well informed as often spraying can clash with fungicide spraying in cereals.

Larger larvae will often burrow into pods and control becomes more difficult being shielded from the spray and more likely to survive. A single caterpillar can attack four to five pods before reaching maturity and will feed in crops for four to six weeks.

Most insecticides used for budworm control are contact chemicals and therefore it is important to have complete coverage of the target. A medium spray quality is necessary as they are light and will flow around with the airstream, particularly at low airflow rates and increase the chance of striking the target inside the canopy.

They are however more subject to off target drift when conditions are not ideal and air induction/inclusion or venturi nozzles are becoming more popular to achieve more uniform droplet size at low pressures. Most insecticide spraying should be at less than 210 microns VMD (volume mean diameter, i.e. 50% of droplets > 210 microns, and 50% of droplets < 210 microns).

This is generally finer than for most herbicides and labels will sometimes specify a droplet range along with water volumes.

In consultation with your agronomist choose a registered product that is the most suitable, and be aware of the withholding period (WHP) for harvest or windrowing/swathing which is the same as harvest. Residue testing is routinely conducted on grain destined for export and domestic stock feed markets

The economic threshold is dependent on three factors: (a) crop value ($/t) (b) cost of control, and (c) the economic loss (yield and/or quality) based on grub numbers present. 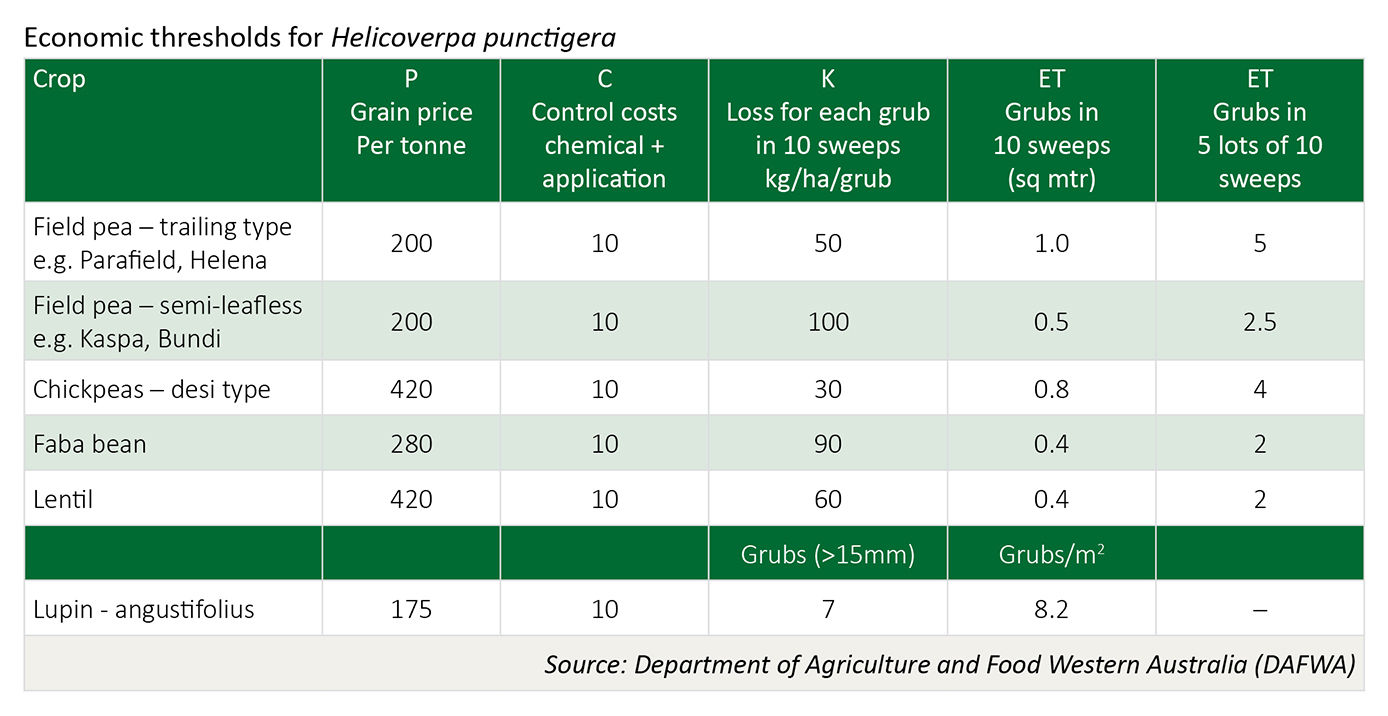 Use of this calculation will provide each grower with a personalised and more precise measure of potential loss from native budworm damage. Growers using this table to calculate spray thresholds should substitute their own control costs and expected on-farm grain prices to provide a more accurate measure of potential loss. Premiums paid for exceeding quality standards for high value pulses (i.e. Kabuli chickpea) may necessitate lower thresholds.