What are grain bags?

Grain bags (known also as silo bags, sausage bags or harvest bags) are becoming increasingly popular. It is important to appreciate their role and how they function, particularly when used to store pulses.

Grain bags allow for storage versatility, whether in the field where harvesting is taking place or at a grain storage site. They are large, sealed plastic bags that can temporarily store up to 300 tonnes of grain. They need to be completely sealed against the escape or entry of air, be impervious to outside interference or influence and an air tight seal must be maintained. As grain bags do not allow aeration, correct grain moisture content (below the current receival standard) at filling and maintenance of the air tight seal is vital. Birds, kangaroos, mice, and especially foxes have been known to penetrate them.

Grain bags are made from a laminated mix of up to three layers of polyethylene, with the first two layers acting as a UV filter and the third layer being darkened to keep out sunlight. Bags stretch up to 10% during the filling process. They are seamless, should be air tight when sealed and have a life of 12–18 months in the open. Ideally they should prevent the development and reproduction of fungi and insects. Grain bags cannot be aerated, so the grain must be stored, and always kept, in sealed conditions. If hermetic conditions exist, the grain should turn residual oxygen into carbon dioxide to asphyxiate insects and inhibit fungi growth. CSIRO research has shown that this does not occur in practice though. A low-oxygen atmosphere is critical to successful insect and mould control, particularly at higher moisture contents and temperatures. Failure to seal punctures quickly and correctly will lead to failure.

All annual and longer term costs need to be considered. Major expenditure is for purchase or hire of the filling and out-loading equipment, the cost of each bag, time incurred during filling and out-loading processes and any wastage. Also cost the time spent in site selection, fencing and regular inspections of the bags and for any maintenance required. These smaller inputs could prevent huge losses if deterioration of grain quality was to occur from failure to maintain the bag’s air tight seal or if grain quality deteriorates during storage. Bag cost is about $4–5 per tonne. Filling and out-loading costs could add another $4.50 to $11.50 per tonne depending on efficiencies. Where regular use of grain bags is expected, the annual costs of having expended capital into a fixed store with aeration may work out cheaper per tonne over an extended period than purchasing grain bags every year.

Pulses are one of the riskier grains to store in grain bags. Carefully assess the use of grain bags for pulses against the option of using other forms of storages for them and using the bags for another grain that is more appropriate. If pulses are to be stored in grain bags, it should be considered as temporary only, and all precautions must be taken in terms of site selection, moisture content at filling, bag sealing, monitoring and maintenance. Consider using grain bags for treatment of a pulse grain sample that requires attention for it to make grade. 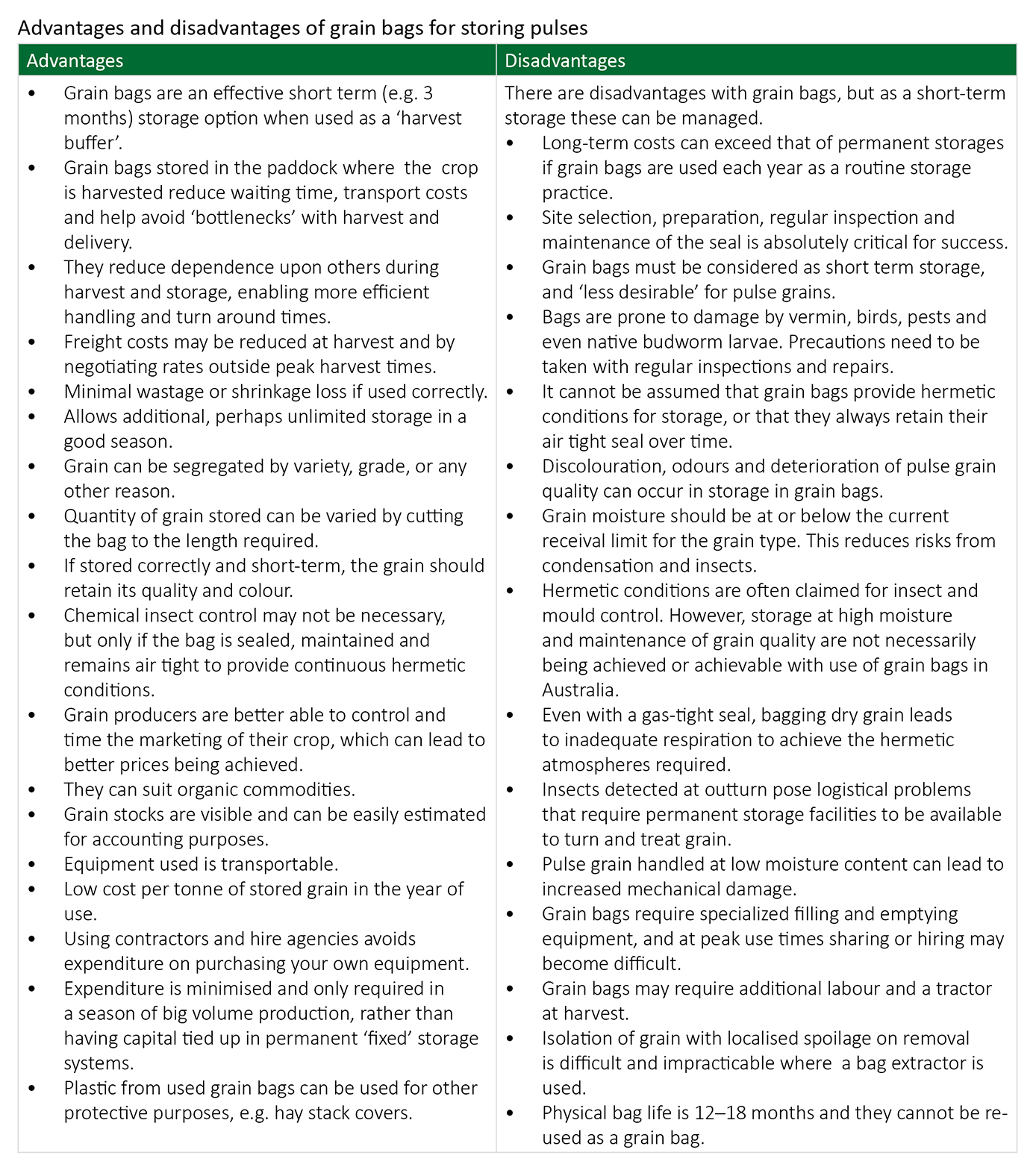 There are risks associated with storing pulses in grain bags:

Grain in grain bags should ideally be stored at moisture content at or below the current receival limit for the grain type. This is lower than that capable of being stored in aerated silos. Condensation and water aggregation under the polythene film can cause localised mould and spoilage in storage. Odours and taints can then spread through the bag, contaminating the entire contents. Achieving a hermetic storage condition in grain bags under Australian conditions is difficult to achieve because over summer even with moist grains we are unable to keep the grain cool enough to allow grain respiration rates high enough to gradually replace the oxygen with carbon dioxide.

Site selection, preparation, protection and maintenance are absolutely critical for best results. Choose high ground that is hard, free of sharp objects, away from trees and drains quickly. Do not work across slopes, and align bags in a north- south direction for more uniform sunlight. Fence off livestock and ensure easy access for machinery. Electric fencing is useful to help keep foxes out. Regularly inspect the bags and immediately reseal any holes.

Grain should enter the bags at or below the current receival limit for the grain type. Take a running sample of grain during filling to determine quality rather than sample later. Moisture content on filling is what comes out at loading unless the plastic is punctured and allows water in.

Grain bags can be filled from a header or chaser bin at around 200 tonnes per hour. They can be emptied by the out-loader at up to 180 tonnes per hour. Expenditure on grain bags is not a capital investment and as such cannot be depreciated under current taxation rules.

Pulses tend to form a lower height profile and bags stand between 1 to 1.2 m from ground level compared with barley, which forms a more rigid bag that can stand up to 2 m from ground level. Wheat bags typically have a lower profile than barley. To preserve grain quality it may be safer to empty the entire bag in one operation rather than to reseal it after partial removals over time.

Routine testing for pressure decay is highly desirable. A pressure ‘half-life’ of 3–5 minutes is a suggested sealing standard that would be appropriate for grain bags. Rather than use sealing strips to make an air tight seal, a ‘heat sealer' unit can be used to create a better seal. It is considered to be simple to use, stronger than standard seals and less fiddly. It may be particularly useful when out-loading in stages. However, it may be wise to empty the entire bag in one operation rather than have to reseal it several times and risk moisture ingress over time.

Condensation on the inside of the film is an inherent problem of grain storage using plastic membranes like those used with grain bags, especially during cooler times of the year and in cool locations. Localised spoilage of grain stored in grain bags can result in spots where moisture has accumulated from internal condensation or water entry through holes and tears in the film. This will result in localised moulding of dry grains because the marginal or low water movement through the surrounding dry grain initially prevents widespread contamination and downgrading. Odours will spread through the entirety of the bag. Pockets of spoiled grain will become mixed through the sample and truck during out-loading, just as it can when discharging from a silo.

Removal of localised spoilage from a grain bag is difficult to do and not practical where a bag extractor is used. During out-turn, grain is not accessible to the operator unless the bag is manually split ahead of the machine that takes the plastic film onto the hydraulic drum.