Botrytis grey mould (BGM) in chickpea is caused by the fungus Botrytis cinerea. B. cinerea is a significant pathogen of pulse crops particularly lentils, ornamental plants grown under glasshouse conditions, and fruit, including grapes, strawberries and apples. Flowers are especially vulnerable to BGM infection. B. cinerea does not infect cereals or grasses.

In the northern GRDC region, B. cinerea has been recorded on over 138 genera of plants in 70 families. Legumes and asteraceous plants comprise approximately 20% of these records. As well as being a serious pathogen, B. cinerea can infect and invade dying and dead plant tissue. This wide host range and saprophytic capacity means inoculum of B. cinerea is rarely limiting. If conditions favour infection and disease development, BGM will occur.

This makes management of BGM different from chickpea ascochyta, which is more dependent on inoculum, at least in the early phases of an epidemic.

B. cinerea also causes pre and post-emergent seedling death. This happens when chickpea seed, infected during a BGM outbreak, is used for sowing. Seedling disease does not need the wet conditions that are usually required for infection and spread of BGM later in the crop cycle.

The first symptom of BGM infection in a crop is often drooping of the terminal branches. If groups of plants are infected, these may appear as yellow patches in the crop. The diagnostic feature is a grey 'fuzz' which, under high humidity, develops on flowers, pods, stems and on dead leaves and petioles.

Lesions can develop anywhere along the stem but are usually first found on the lower part of the stems often starting in leaf axils. Infected seeds are usually smaller than normal and are often covered with white to grey fungal growth.

When a severely BGM-infected canopy is opened, clouds of spores are evident (avoid inhaling these). During dry weather the 'fuzz' is not obvious, but it develops again when wet weather returns. Small, dark brown/black resting bodies (sclerotes) of B. cinerea may develop on infected dead tissue, and are capable of producing spores on their surface.

The stem lesions caused by BGM can be confused with those caused by Sclerotinia sclerotiorum (at and above ground level) and by Sclerotinia minor (at ground level), but neither of these pathogens produce the grey 'fuzz' typical of BGM. Also, sclerotinia lesions tend to remain white, and are covered by a dense cottony fungal growth, in which irregular shaped black sclerotes develop.

B. cinerea produces diffuse white fungal growth which later turns grey due to the production of huge numbers of spores borne in clusters at the ends of dark stalks.

Over 10 million spores can be produced on a single 2 cm long lesion on a chickpea stem. Consequently, B. cinerea has the capacity to rapidly develop during conducive weather conditions. The spores can be blown many kilometres, and if deposited on chickpea plants they can remain dormant until conditions favour spore germination.

Free moisture is necessary for germination and infection. Lesions and the grey 'fuzz' are evident 5–7 days after infection under ideal conditions.

B. cinerea is favoured by moderate temperatures (20-25°C) and frequent rainfall events. It does not become a risk until the average daily temperature (ADT) is 15°C or higher. The combination of early canopy closure, prolonged plant wetness and overcast weather results in high relative humidity and rapid leaf death in the canopy, conditions which are ideal for B. cinerea.

Factors that contribute to a BGM epidemic

Factors that favour infection and spread of BGM in favourable seasons include:

Rainy weather not only favours the disease but wet paddocks also limit the spray opportunities for ground rigs.

Following a season where widespread BGM infection has occurred in a district there is often a shortage of disease-free seed for planting and there is a high quantity of infected crop residue across a large area. Both of these factors will increase the disease risk for the following year. Whether BGM becomes a problem the following year will depend on seasonal conditions.

It is likely that the pathogen can remain viable and capable of survival for as long as infected stubble remains on the soil surface. Burial of stubble removes the ability of B. cinerea to produce spores that can be blown around, and increases the rate of stubble breakdown by soil microbes.

Burying or burning stubble can significantly increase the risk of soil erosion and reduce water infiltration.

Volunteer chickpea plants growing in or near paddocks where BGM was a significant problem are a likely method of carry-over and must be managed by application of herbicide or cultivation.

This will also reduce carryover of ascochyta.

Research on harvested seed has shown a germination test does not accurately predict emergence. Accordingly, growers are advised to conduct their own emergence test, as follows:

Paddocks in which chickpeas were affected by BGM should not be re-sown to chickpea, faba bean or lentil the following season. Nor should chickpea be sown beside paddocks where BGM was an issue the previous season.

As for ascochyta blight, chickpeas should be grown as far away from paddocks in which BGM was a problem as is practically possible.

However, under conducive conditions, this practice will not guarantee that crops will remain BGM free, because of the pathogen's wide host range, ability to colonise dead plant tissue, and the airborne nature of its spores.

If long-term weather forecasts suggest a wetter-than-normal year (La Nina), consider sowing in the later part of the suggested sowing window for your district and on wider rows (e.g. 100 cm). Planting on wider rows results in increased air movement through the crop and reduced humidity within the canopy.

All current commercial varieties suitable for the northern region are susceptible to BGM, although Howzat is reported to have slightly better resistance than other varieties. 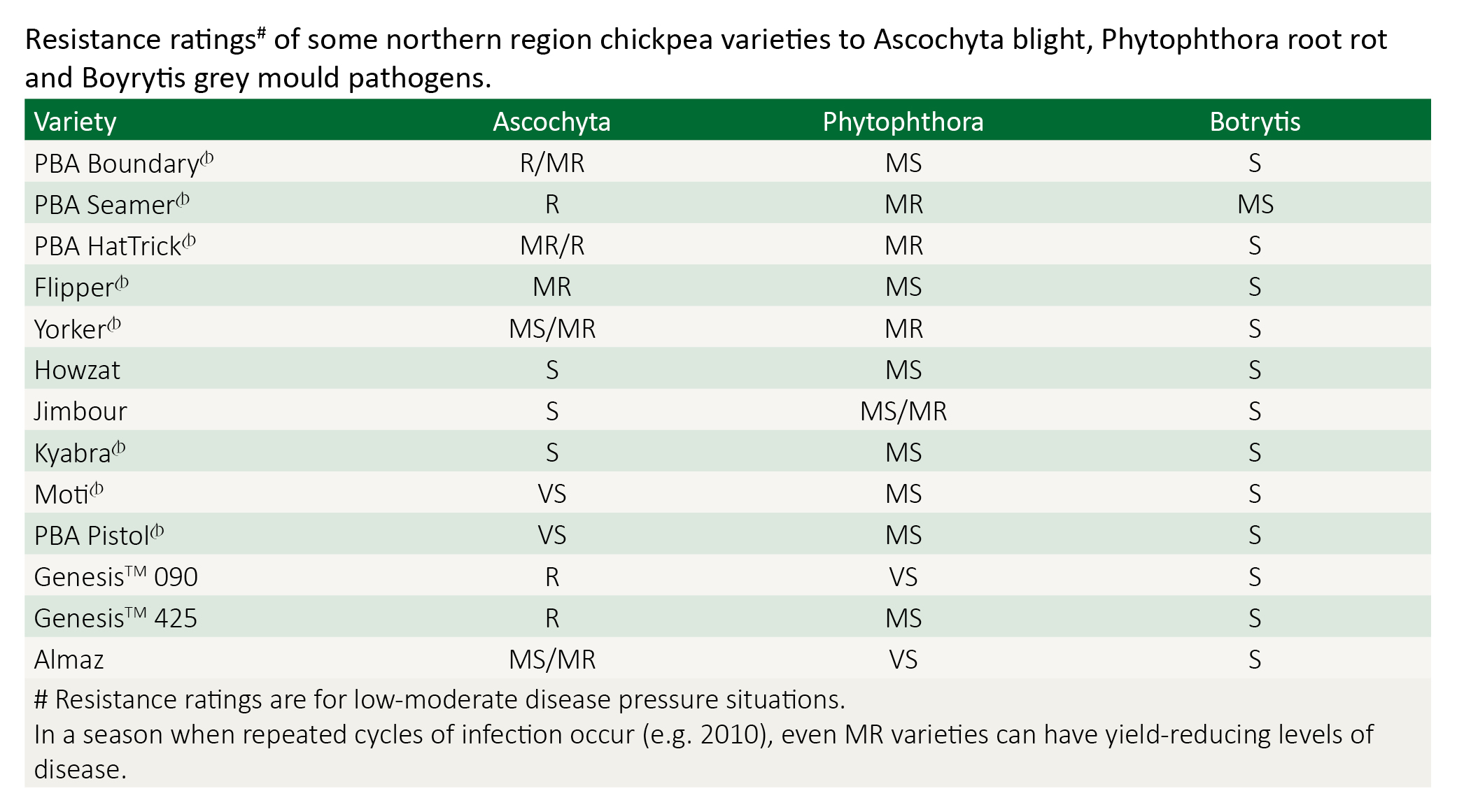 In areas outside central Queensland, spraying for BGM is not needed in most years.

However, in seasons and situations favourable to the disease, a preventative spray of a registered fungicide immediately prior to canopy closure, followed by another application 2 weeks later, will assist in minimising BGM development in most years.

If BGM is detected in a district or in an individual crop, particularly during flowering or pod fill, a fungicide spray should be applied before the next rain event.

None of the fungicides currently registered or under permit for the management of BGM on chickpea have eradicant activity, so their application will not eradicate established infections. Consequently, timely and thorough application is critical.