Posted in Marketing and trade, Press Releases on May 17, 2017

Over 20 years ago, Sofi Sipsa’s interest in the human nutrition potential of lupin was piqued as she evaluated samples for anti-nutrients such as alkaloids to inform the Western Australian government’s plant breeding team. In the early days the plant breeders’ only interest was to develop highly productive cultivars suited to producing grain for stockfeed. Ms Sipsa encouraged the plant breeding team to maintain the nutritional value of the Australian sweet lupin and for 15 years headed up the Department of Agriculture and Food’s food nutrition program for lupins. In this role Ms Sipsa championed a string of diet intervention trials to uncover the potential value of lupin in the reduction and management of chronic diseases.

As a result, there is now compelling evidence that incorporating lupin ingredients into human diets can have direct health benefits for individuals. However, the very low level of starch in Australian sweet lupin presented food technologists with a challenge as they sought to unlock the nutritional benefits of this pulse, particularly for consumers looking for quick and easy meal preparation.

Lupin was approved for human consumption in Australia in 1987 and in Europe in 1999. Although less than four per cent of the world’s lupin production is consumed as a human food, this still equates to around half a million tonnes of foods containing lupin ingredients being consumed each year in Europe. In the home of the Australian sweet lupin, consumption is very low and, until recently, very little product development had been done to introduce this valuable ingredient to Australian diets.

The greatest hurdle that has been overcome is understanding how to achieve rapid hydration of lupin in the absence of starch. The innovation that came from Australian research has overcome the difficulty with hydration without initiating oxidation that leads to the development of ‘beany’ flavours that many consumers find unpalatable.

Grinding the lupin kernel to flour exposes the lipids in the grain to oxygen and triggers an enzymatic reaction that results in the change in flavour. By sheering the kernel to a very specific dimension the resultant lupin flakes hydrate quickly and the integrity of the fat cells is maintained, avoiding the flavour profile change. This is all achieved without any other processing or treatments, maintaining the nutritional integrity of this unique food ingredient. 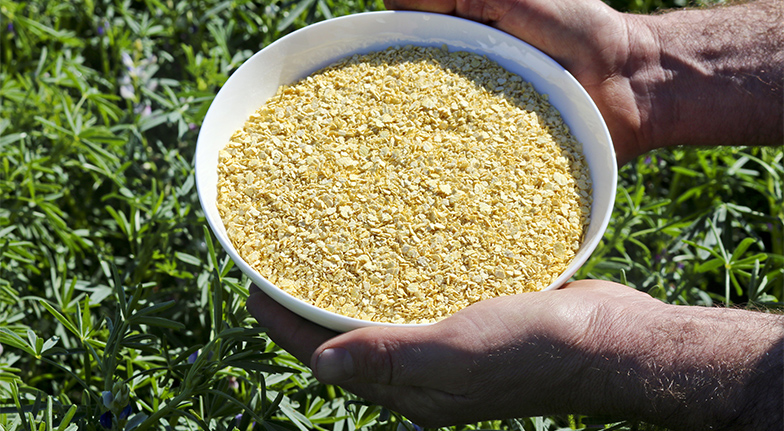 By sheering the kernel to a very specific dimension the resultant lupin flakes hydrate quickly and the nutritional integrity of this unique food ingredient is maintained without a change to the mild flavour profile. Image courtesy of The Lupin Co

Incorporating lupin ingredients into meals and snacks can increase protein and fibre, which are linked to increased satiety, while also reducing the refined carbohydrate content of the food.

Cardiovascular disease, or heart disease, remains the number 1 cause of death in Australia, and high blood pressure is a major risk factor. Eating products made with 40 per cent lupin-fortified flour replacing wholemeal wheat flour has been shown to significantly lower blood pressure and so reduce the risk of heart disease.

To determine if a lupin-enriched diet would have a positive effect on key health risk factors Dr Regina Belski, now a researcher and senior lecturer at La Trobe University, led a study involving 131 overweight but otherwise healthy people. The aims of the research were to determine if eating lupin flour-enriched foods would assist in weight loss and hence improve cardio-vascular health.

In the study, half the participants were given bread, biscuits and pasta made with lupin-enriched flour while the rest of the group had these same foods made using wholemeal flour. At the end of 12 months, despite similar weight loss in both groups, the group eating lupin flour foods had significantly larger improvements in a number of key risk factors associated with cardiovascular disease and diabetes. The results of this study were published in the International Journal of Obesity in 2011.

High fasting insulin concentrations and insulin resistance are precursors to diabetes and both appeared to be reduced when an individual’s diet included lupins. Diabetes is Australia’s largest and fastest growing chronic disease. If the addition of lupin ingredients to meals and food products can stem the tide of this disease many lives will be improved and the large cost of treating and managing the disease can be reduced.

Several other studies have also supported the beneficial effects of lupin consumption such as:

The Lupin Co (TLC) has taken up the challenge to bring lupin flakes, and all their goodness, to kitchens, restaurants and bake-houses across Australia and the world. Launched in 2016, The Lupin Co uses the Australian innovation to manufacture the ‘all natural’ lupin flake and has already established nation-wide distribution of their product. Ms Sipsa is now a shareholder and in-house nutritionist with TLC, revelling in the opportunity to share her enthusiasm for this product with consumers.

TLC purchase all their lupin beans from specialist growers in Western Australia, where 80 per cent of the world’s lupins are grown. In just a few short months the company has seen a very positive response to the product in Australia and are hoping to make significant inroads into the growing health and wellness, fitness, gluten-free and gourmet foods markets.

Nick Goddard, CEO of Pulse Australia, the peak industry body for the Australian pulse industry, sees the development of lupins for food as an important innovation for the Australian industry. Pulse Australia fully supports all efforts to find higher value applications for lupins, which are well suited to the soils of Western Australia, and are an important break crop in the cereal rotation. The work of companies like The Lupin Co, investing in and perfecting this technology, provides the opportunity to grow the value of this crop, and improve the return for the farmers so everyone in the value chain can benefit.

Growers in Western Australia produce 80 per cent of the world’s lupins. Although lupins have a long history in the Mediterranean and in South America, the Australian sweet lupin was domesticated in Australia in the 1960s and now represents 30 to 40 per cent of pulse production in Australia.