Coraki growers Geoff and Vicki Pye have been growing soybeans in rotation with sugarcane for nearly 30 years.

Measuring the fate of fixed nitrogen in Northern Rivers district

Soybean crops grown for green manure can fix up to 300 kg N per ha but the availability of that nitrogen for future crops varies considerably.

Northern Rivers growers were concerned that much of the fixed nitrogen from soybean crops may not be present in the soil at the end of the winter fallow period when the next cane crop is planted.

Before the soybean crops were sown in December 2016, soil cores were taken and soil properties, including mineral nitrogen content, were analysed to a depth of one metre. At podfilling stage crop samples were taken from three 1 m lengths of row selected at random within each crop.

The plant material was dried, weighed and finely ground before calculating the amount of nitrogen derived from the atmosphere (%Ndfa). To do this, weeds collected at the sampling points were used as the non N-fixing reference and plants of each variety used in the trial (Asgrow, Manta and Richmond) were grown in an N-free environment to provide the other reference data needed to calculate %Ndfa in the shoots of the trial soybean crops at the time of termination.

In this trial, soybean dry matter yields at mid podfill ranged from 3.4 to 12 t/ha, with shoots containing 91 to 343 kgN/ha. The lower end of this range was from paddocks where wet conditions early in the crop resulted in low plant counts and poor crop vigour. These results are comparable with findings from earlier trial work by Dr Natalie Moore and others that established a shoot N accumulation range of 130 to 420 kgN/ha for crops grown in the Northern Rivers district from 2009 to 2012.

The amount of nitrogen in the shoots that was derived from the atmosphere ranged from 30 per cent in the crops that were poorly established (and likely poorly nodulated) up to 90 per cent in high biomass crops. “If we disregard the poorly established crops the results show that the amount of nitrogen fixed from the atmosphere and stored in soybean shoots at mid podfill stage ranged from 100 to 290 kgN/ha,” said Dr Rose. “Importantly this does not account for nitrogen stored in the root systems.” 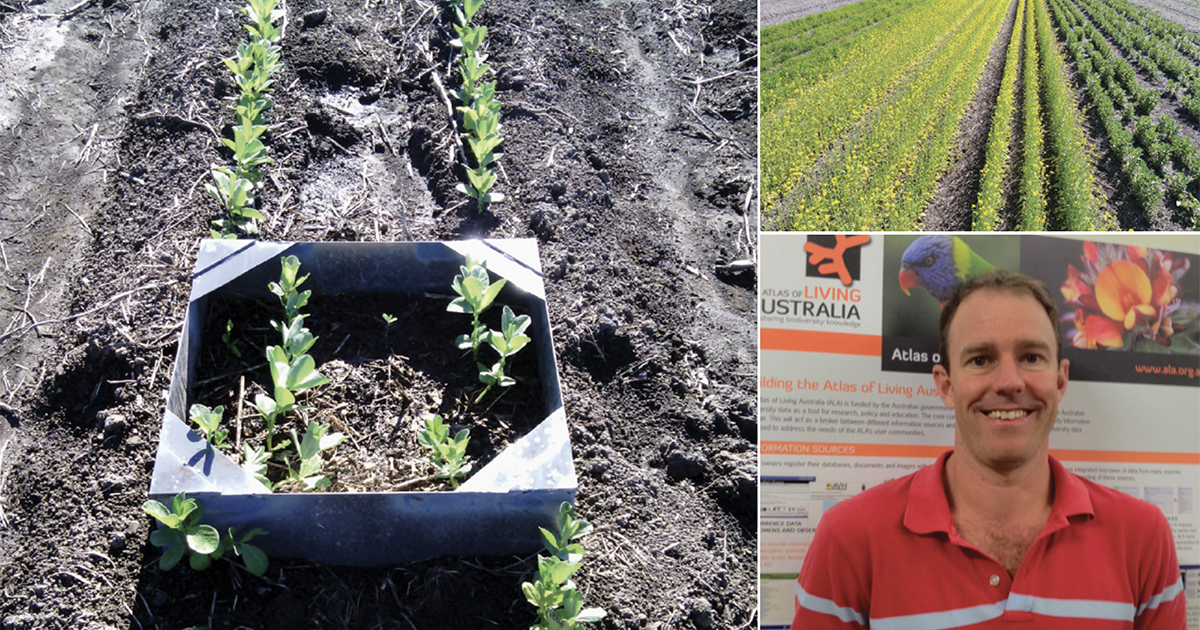 (Above left) Three 0.6 m by 0.6 m boxes were placed 0.3 m into the soil in three of the trial paddocks and 15N enriched soybean shoots were used to replace the residue from the paddock-grown crop. In spring, prior to cultivation for the following sugarcane crop, soil samples were taken from inside the boxed areas and analysed for the presence of 15N isotope. (Top right) Winter cover crops could be an option for growers wanting to utilise the N fixed by soybean crops. (Above) Researcher Dr Terry Rose, Southern Cross University, said over 32 per cent of the fixed N returned to the soil when soybeans are green manured is lost before the following cane crop is planted in Spring.

Many of the soybean crops were not harvested in 2017 owing to flooding, and therefore acted as green manure crops. The second part of the trial was to investigate the movement of fixed atmospheric nitrogen in the months between soybean harvest (or green manuring in the 2017 year) and planting the next cane crop in September.

To do this Dr Rose grew soybean plants of the same three varieties in a glasshouse environment where they were fed urea fertiliser enriched with the stable 15N isotope. These plants were harvested during late podfilling and the shoots were used to replace the residue from the paddock-grown crop in three 0.6 m by 0.6 m boxes placed 0.3 m into the soil in three of the trial paddocks.

In spring, prior to cultivation for the following sugarcane crop, soil samples were taken from inside the boxed areas and analysed for the presence of 15N isotope.

“At the end of the winter fallow period we recovered 55 to 68 per cent of the 15N isotope applied,” said Dr Rose. “The unrecovered portion was lost either through leaching below the 900 mm testing depth or volatilisation into the atmosphere.”

“The highest loss of 45 per cent occurred on the lighter soil type, which also received higher rainfall than the other farm,” he said. “Interestingly, around 20 per cent of the recovered 15N on the light soil was located in the 300 to 600 mm depth zone, suggesting that leaching was the key loss pathway.”

Rain received after cane planting may have leached this remaining nitrogen below the cane root zone. 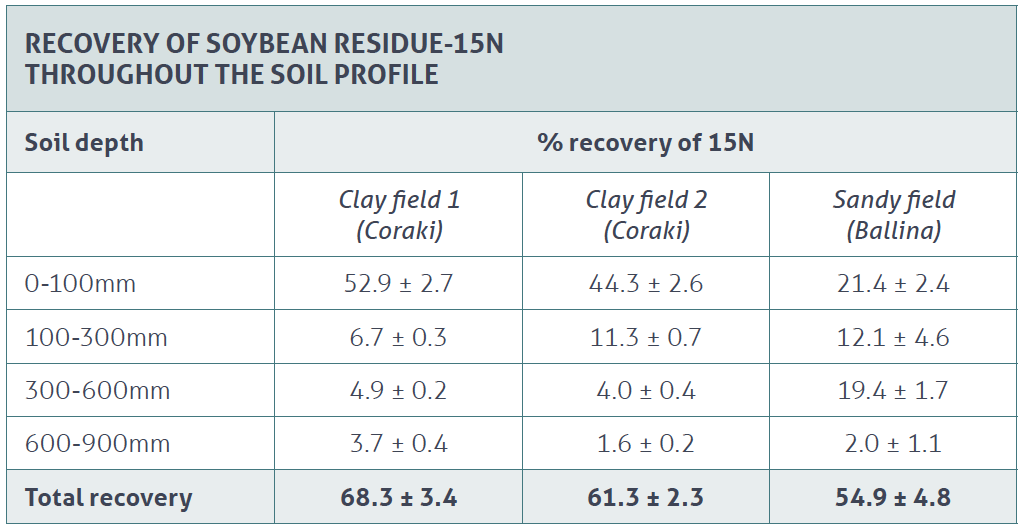 Where a soybean crop is harvested for grain, much of the fixed nitrogen is removed from the field, leaving stubble with a C:N ratio of around 65:1 compared to the more readily broken down green manured material with a C:N ratio of 12:1. This may protect the fixed nitrogen from the large losses measured in this trial, albeit that less nitrogen will remain in the paddock due to the removal of the bulk amount in the harvested grain.

Alternatively, there may be potential to grow a winter cover crop to utilise the fixed nitrogen soon after green manuring.

Geoff and Vicki Pye hosted two of the strip trials on their property ‘Oakland’ at Coraki property, where they have grown soybeans in rotation with sugarcane for 29 years.

Geoff follows a six-year cropping cycle, cutting cane three times before planting soybean as a break crop before returning to cane. Crops are grown in raised beds in a controlled traffic system with 1.8 m wheeltrack/bed width.

“The old cane stool is destroyed using discs and a rotary hoe and we add lime and ameliorants and laser grade if needed, then the beds are formed and the soybeans planted,” said Geoff. “After the soybeans are harvested the stubble is left until spring when we strip till in the beds to plant the cane.”

Geoff has found Asgrow to be a reliable soybean variety that meets human consumption grade, is tolerant of waterlogging and is not prone to weathering at harvest.

“We use the rule of thumb established in previous research that suggests we can count on 60 units of N per 2.5 tonne of grain harvested per ha being available for the following cane crop,” said Geoff.

Geoff and Vicki have also participated in winter crop trials and were impressed with the benefit these crops can have on soil tilth particularly. Geoff said their peat soils are always easy to work but the winter cereal crops improved the friability of their heavy clay soils.

“The problem lies in logistics really,” he said. “Growing a cereal crop requires some additional machinery to be able to plant into the soybean stubble. We have thought about the possibility of broadcasting oats seed when the soybean crop starts to drop its leaves so the oats can establish underneath the soybeans.”

Geoff believes this would achieve soil benefits but may come at a cost in terms of weed control, which is usually a high priority between soybean harvest and planting the next cane crop.