Soybean and mungbean crops can compete well with weeds

When weeds are controlled for the first three to six weeks after planting, mungbean and soybean crops can suppress later germinations of weeds and produce higher crop yields when planted on narrower row spacings.

Evidence is mounting that summer crops really can be an effective weapon in the war on herbicide resistant weeds. With soil moisture at a premium, there is nothing spare to waste on summer growing weeds.

Four of the most difficult to control summer weeds, feathertop Rhodes grass (FTR), awnless barnyard grass, common sowthistle and flaxleaf fleabane, now have confirmed cases of glyphosate resistance, so the pressure is on to find effective non-herbicide control tactics. These weeds can produce 40,000, 42,000, 25,000 and 110,000 seeds per plant respectively. Other studies have found these numbers could be even higher, so every effort to reduce seed production is worthwhile.

With investment from the GRDC, researchers from NSW Department of Primary Industries, University of Sydney and Queensland Department of Agriculture and Fisheries are conducting trials to identify ways to increase the competitiveness of summer pulses.

In the 2017–18 summer mungbean plots were established using three row spacings (25, 50 and 75 cm) and two crop densities (20 and 35 plants per m2). Seed of feathertop Rhodes grass and awnless barnyard grass was spread at planting and the plots were irrigated to ensure optimal crop and weed emergence.

With only one year of data from this trial so far it is difficult to make recommendations. Average seed head production in non-crop treatments was 1745 heads/m2 for feathertop Rhodes and 1525 heads/m2 for awnless barnyard grass. Growing a crop more than halved the number of weed seed heads produced, even in the least competitive configuration for the crop, compared to the crop-free plots.

Row spacing in mungbean had a clear impact on weed seedhead production for both weed species. This effect has been demonstrated numerous times in a range of agronomic trials with mungbean. Narrowing row spacing to 25 cm reduced feathertop Rhodes grass seed heads to 32 plants/m2. For awnless barnyard grass, narrowing row spacing to 50 cm or less reduced seed heads to less than 10 per m2. 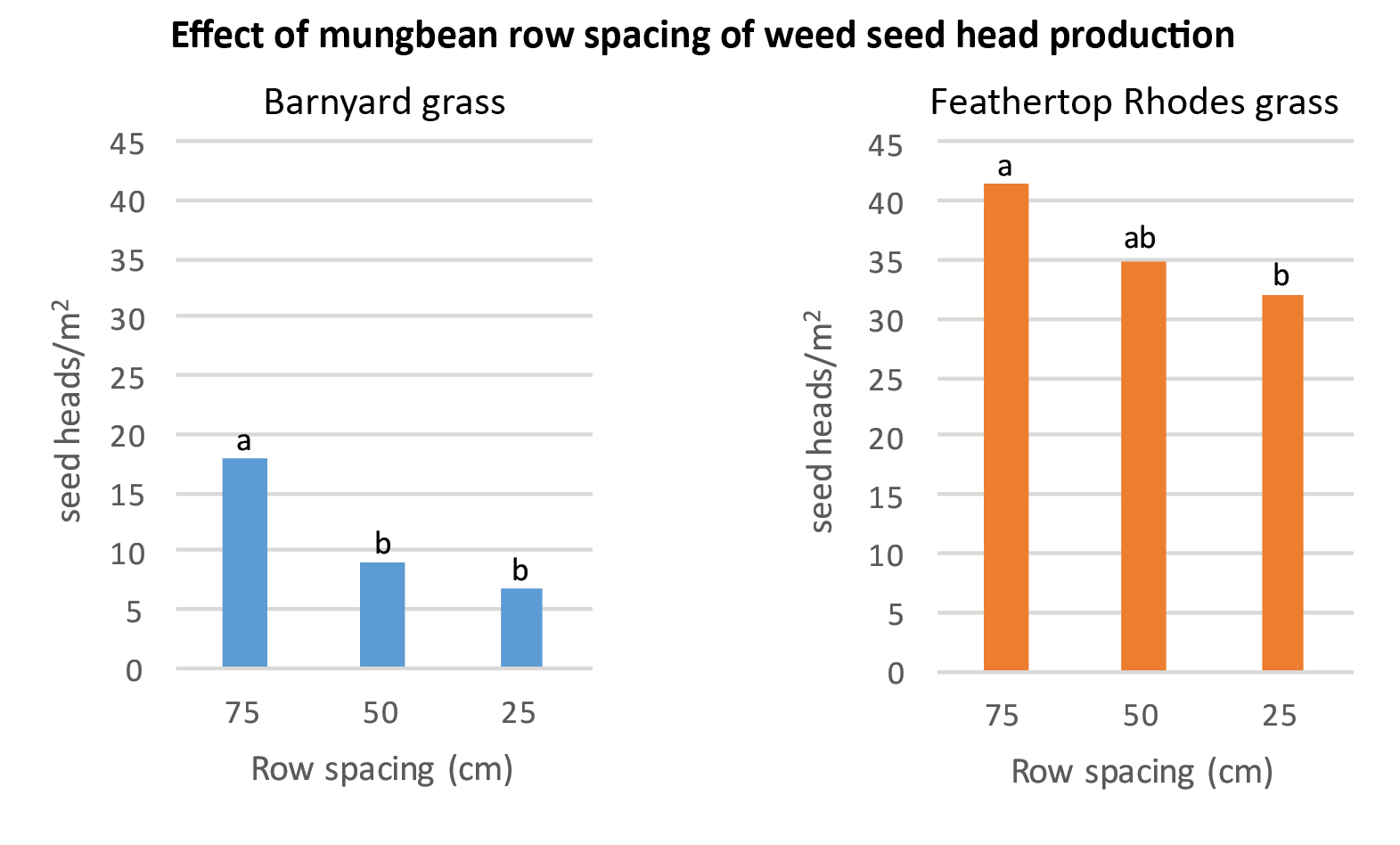 In a separate trial, University of Queensland researchers confirmed that row spacing, not plant population, is the key driver to reducing weed growth in soybean and mungbean crops.

In weed-free plots there was a 20 per cent yield benefit in changing from 75 cm row spacing to 25 cm. This yield difference was 65 per cent in plots where weeds were introduced 6 weeks after planting and a huge 121 per cent higher when the weed infestation occurred three weeks after planting.

Summer crops are an integral part of many farming systems and play an important role in an integrated weed management program. Many summer weeds only remain viable on the soil surface for a period of around 12 months so if a competitive summer crop is followed with a competitive winter crop and harvest weed seed control, it is possible to have a real and lasting impact on the weed seed bank.