Plant-parasitic nematodes currently cost the Australian cane industry more than $80 million per year. Yield losses are sometimes greater than 40% but losses average 10% in plant cane and 7% in ratoons. This article explains how improving soil health and using legumes as a rotation crop reduces losses caused by nematodes.

Root-knot nematode is the most destructive pest, but is only found at high population densities in light-textured soils and permeable clays of volcanic origin. Galls and elongated swellings are produced on root tips and this damage reduces root elongation and limits the plant’s capacity to take up water and nutrients.

Root-lesion nematodes live within root tissue and feed on root cells, causing discoloured lesions on the root surface and the death of fine roots and structural roots. On an industry wide basis, this nematode causes the greatest economic losses because it occurs in all soil types and cane-growing districts. Pratylenchus zeae is the dominant species but surveys have shown that other species (e.g. P. coffeae, P. teres, P. brachyurus and P. penetrans) sometimes occur on sugarcane, particularly in the Burdekin.

Although plant-parasitic nematodes have the capacity to markedly reduce the yield of sugarcane, losses are exacerbated by a range of soil health problems. First, nematodes multiply excessively in cane-growing soils because the natural enemies that normally keep them under control are no longer present. Second, roots do not proliferate readily in compacted and structurally degraded soils, and this adds to the damage caused by nematode pests. Third, nutrient uptake is not as efficient as it should be because carbon levels are not high enough to sustain the beneficial organisms that mineralise the nutrients required by plants. Consequently, if steps are taken to improve soil health, particularly the biological component, plant growth will improve and the crop will be better able to cope with the damage caused by plant-parasitic nematodes.

The first step in any nematode management program is to identify the plant-parasitic nematodes present in a particular field, monitor their populations over time, and use the results to identify the key species likely to be causing economic damage. Such information can be obtained by regularly collecting soil samples from the field and forwarding them to the SRA laboratories at Tully or Woodford. When such samples are processed, it is important to also obtain counts of the beneficial nematodes present in the soil, as that information provides an indication of the soil’s biological status.

Nematode analyses have traditionally been done by extracting nematodes from soil and counting them under a microscope. However, DNA-based methods are likely to be used more widely in the future. SRA and SARDI are currently using species-specific molecular probes to quantify both root-knot and root-lesion nematodes, while an Australian company (Metagen) is developing metagenomic methods to identify all the nematodes in a soil sample.

Extensive research over many years has shown that there is no single tactic that will effectively control plant-parasitic nematodes in sugarcane. Consequently, an integrated approach must be taken in which a number of tactics are used together to not only reduce populations of the key nematode pests but also improve soil health.

Once a nematode monitoring program has been established and the biological status of a soil is known, the following practices should be integrated into the farming system to improve the health of the soil and minimise the effects of nematodes.

From a nematode perspective, populations of plant-parasitic nematodes will decline when the above farming system is adopted for the following reasons:

The important point about the above practices is that they are the foundation on which effective systems of minimising losses from plant-parasitic nematodes can be built. Once crop rotation and cover cropping become integral components of the farming system; bare fallows are eliminated; tillage is minimised; crop residues are retained on the soil surface; levels of soil organic matter are raised; and compaction and other sub-optimal soil constraints are removed, biological activity and diversity will improve and the biological mechanisms which keep nematodes under control will begin to operate effectively

Nematicides are sometimes promoted as a nematode control tactic in sugarcane, but their value is questionable for a number of reasons. First, they are expensive and may not always provide an economic return; second, they reduce nematode populations for relatively short periods; and third, most nematicides are detrimental to natural enemies.

Benefits from legumes as a rotation crop

Legumes are an important component of best-practice sugarcane farming systems because they provide additional income from grain sales, reduce fertiliser costs, and improve soil health. Lower fertiliser inputs are possible because legume residues usually contain the equivalent of 200 kg N/ha, which is more than enough to sustain a plant crop of sugarcane. The soil health benefits are manifested through biological improvements: earthworm numbers increase and this improves soil structural properties, while an increase in populations of the free-living nematodes which graze on microbes mineralises the nutrients required by the following cane crop.

Legumes as a nematode management tool

An additional reason why legumes are a useful rotation crop is that they provide worthwhile levels of nematode control. They are particularly useful against P. zeae, a widespread pest that multiplies readily on grasses such as sugarcane. Legumes are relatively poor hosts of this species, with field studies showing that nematode population densities are usually reduced by more than 80% following soybean or peanut. As all legumes are relatively poor hosts of P. zeae, from a nematode management perspective it does not really matter which legume is chosen as a rotation crop.

In soils that are suitable for root-knot nematode, the range of legumes that can be used is much more restricted, as the legume selected must have a reasonable level of resistance to this pest. Based on the options listed in the table below, peanut is one of the best candidates, as it is highly resistant to the root-knot nematode species commonly found in areas where sugarcane is grown. Overseas studies have shown that peanuts are susceptible to certain races of M. javanica and M. arenaria, but those races have never been found in Australia. Peanut is susceptible to M. hapla, but this species prefers cool-climates and is not very common in cane-growing regions. The soybean cultivars A6785 and Stuart are also useful because they are resistant to the root-knot nematode species commonly found on sugarcane.

Although a single legume crop will reduce populations of the key nematode pests of sugarcane, it is important to recognise that any control obtained will be relatively short-lived. By the time the following plant cane is harvested, nematode populations will usually have returned to their normal levels. Nevertheless, sugarcane benefits from the legume break because its root system is able to establish in soil that is relatively free of damaging nematodes. Also, ratoon crops become more tolerant of any nematode damage due to improvements in soil health.

A pot trial by DAF researchers investigated : Legume varieties differ in their response to nematodes

Nematodes as pests of legume crops

Although legumes are an important component of integrated nematode management programs for sugarcane, care must be taken to ensure that the legume crop does not suffer nematode damage. Root-knot nematode can cause severe galling on susceptible soybean cultivars such as Leichhardt, and heavy losses have been observed on mungbeans. 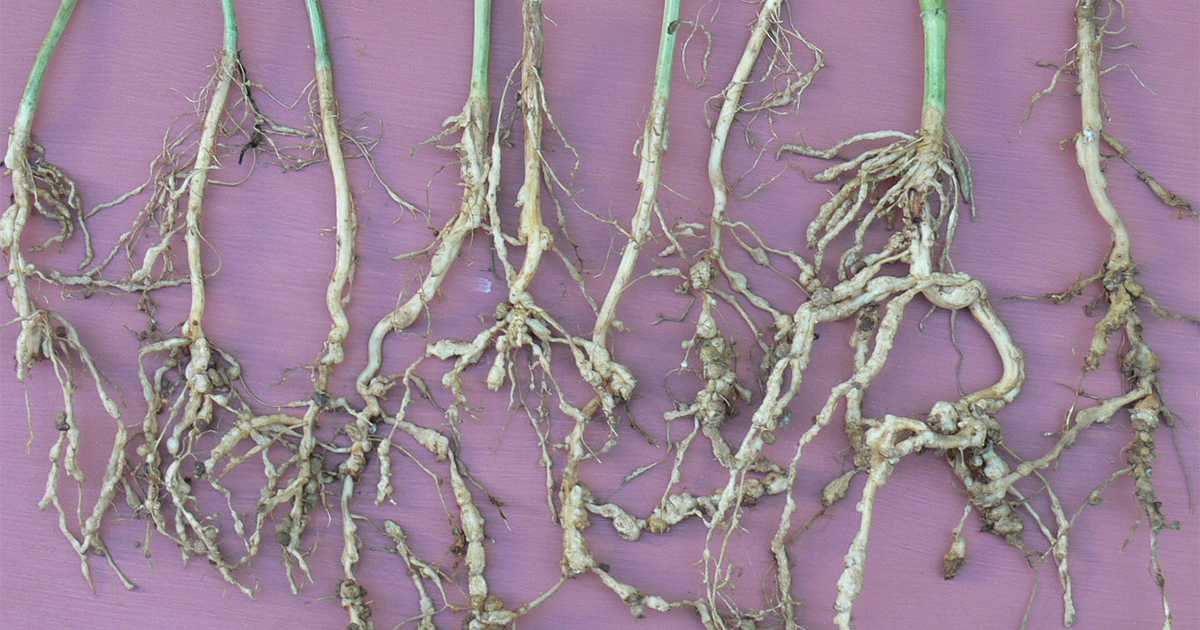 Root-knot nematode can cause severe galling on susceptible legume cultivars.

Consequently, if these crops are to be grown in situations where root-knot nematode is likely to be present, a pre-plant nematode test should be taken to check that the nematode population is below levels that will cause economic damage.

A pre-plant nematode test is also worthwhile if peanut is to be planted in situations where Pratylenchus brachyurus may be present. This root-lesion nematode species is widely distributed in the South Burnett and Atherton Tableland regions of Queensland, and although damage is usually not severe, its subtle effects on yield are often overlooked.

Two other Pratylenchus species are relatively common in the grain-growing regions of Queensland and NSW and although their distribution in coastal regions is not known, they have the potential to damage legume crops. Although more research on the pest status of these species is needed, P. thornei can multiply to high densities on chickpea, cowpea, faba bean, navy bean, mungbean and soybean, while chickpea is a relatively good host of P. neglectus.