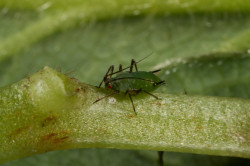 Megoura crassicauda is a new pest in Australia that could impact some legume crops, particularly faba bean, broad bean and vetch. Megoura crassicauda is an aphid species native to north-east Asia, and was considered an exotic pest in Australia prior to its detection on broad bean plants in a suburb of metropolitan Sydney, October 2016. After this initial detection in Australia, eradication of M. crassicauda was deemed unfeasible based on previous unsuccessful attempts to eradicate exotic aphid species.
→ Full story

PBA Leeman is a high yielding narrow leaf lupin suited to an area stretching from the Northern Agricultural Region through to the Lakes District in the south.
→ Full story 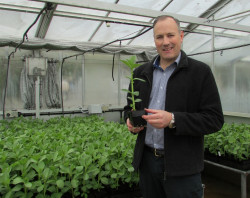 Pulse Australia has compiled fungicide use guides for the 2017 season. These guides provide a consolidated list of chemicals and approved usage patterns, for both on-label and permit.
→ Full story

The lupin anthracnose biosecurity zone (which encompasses the Local Government Areas of Cootamundra/Gundagai, Junee and Coolamon) has special conditions including restrictions on the growing and sale of certain lupins within the zone.
→ Full story

In the face of heightened fungal disease pressure in 2017 a number of new fungicide permits have been issued for the protection of chickpea, faba bean, lentil and field pea crops.
→ Full story

Biosecurity in the pulse industry

Agronomists who use their work vehicles, including quad bikes that are transported from farm to farm, to inspect paddocks need to make time to remove any soil or plant material that may risk spreading pests, diseases and weed seeds.
→ Full story

Prospects for irrigated pulses in 2017

Irrigated pulses may be a good option for growers in 2017 provided fields are well drained and disease risk is addressed.
→ Full story